There isn’t a T-shirt….yet, but later this year I plan to hike from Dorking to Dover…in five days.

There, it’s out there, public for all to see and for all to heap on me humiliation if I don’t follow through. I’ve talked an impressive game, telling friends and neighbors of my plan soliciting, “oohs” and “ahhs,” and statements like, “That’s quite an ambitious plan you’ve got.” 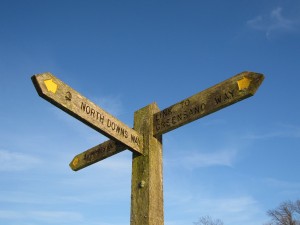 It is ambitious. I’ll be hiking the North Downs Way that cuts across southern England from West to East, going through Canterbury and ending in Dover at the White Cliffs of Dover, overlooking the English Channel toward France. The pathway (as trails are called here) is roughly 132 miles from its beginning in Farnham to its end in Dover. It passes within a half mile of our house and from here to Dover is about 100 miles, or what would be an average of about 20 miles a day to make it in five days. I may give myself a sixth day to account for lingering in Canterbury and visiting the Cathedral.

Another name for North Downs Way is Pilgrim’s Way. The two are separate pathways but converge for most of the trip to Canterbury. The Pilgrim’s Way is the route many a devout Catholic annually took for making penance at the Cathedral. This pilgrimage was canonized in Canterbury Tales, by Geoffry Chaucer.

Walking, or “rambling” as it is called here is a serious hobby (there is a national rambling club with many local branches), so to say I’m going to make this trek immediately grabs attention and a fair amount of surprise that an American would be endeavoring something so bold that requires so much physical exertion. Even without having done it, just the fact that I’ve even considered it,  garners credibility. But make no mistake, I am certain if I don’t follow through I’d have accomplished exactly what many Brits would expect of an American.

Brits are people of considerable resolve, especially the older generation, many of whom I usually encounter on a hillside somewhere while rambling. Remember, these are the people who had bombs raining on their major industrialized cities during WWII. They emerged from rubble realizing they were not dead and believed if that is the best the Germans could offer then it will be virtually impossible to be defeated. They pulled themselves together and determined to carry on. Most Brits don’t grumble much so to milk the great Dorking to Dover ramble of as much pre-ramble drama as possible could potentially backfire.

So, last night with map spread on the table, highlighter in hand and Web browser open looking for places to bed down each night, I launched into the initial stages of actually planning my adventure. There is equipment to buy, meals to plan and boots to break in. Of course the accomplishment won’t be complete until there is a T-shirt: “Dorking to Dover 2010: the ramble of all rambles.”