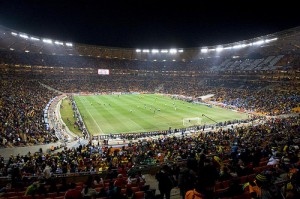 There, I said it. No remorse. No shame, and actually it feels quite liberating. Saying you hate soccer is almost as politically incorrect these days as saying you think people migrating to America ought to enter the country legally; or that one of the most noble purposes bovines serve is being slow roasted to medium rare and served with a large baked potato. Seems like there has been such a push over the past few years for good ol’ red-blooded, American sports fans to become more tolerant of a game that requires incredible skill, yet features world class whiners.

And therein lies the contempt I have for the sport. Just when I’m seduced by the exploits of Wayne Rooney and actually endure a full 90 minutes of a Premier League game, or find myself talking to my neighbor about the nuances of Manchester United vs. Manchester City, the World Cup came around and reminded me all over again that I hate soccer.

It’s the floppers, whiners and drama queen prima donnas that for me so totally hijack any ounce of interest I may have been lured to invest. I scream at the television, things like, “get up you sissy;” or, “real men don’t get hurt by imaginary people,” or, “Even Reese Witherspoon can act better than that” (albeit not by much).

“It’s part of the game,” I’ve been told by many an aficionado with an international perspective. However, I am certain these same fanatical groupies would see Mike Tyson biting off Evander Holyfield’s ear as part of boxing. “Hey, hey!,” an offended and snobbish soccer fan may retort. “Not the same. Biting is cheating.” Well, I see flopping and diving as cheating. It totally undermines the spirit of competition at the least and at worst – which it usually is – manipulates the rules of the game to seize an unfair advantage. That’s cheating, and I hate it.

Makes me wonder where along the way these stars picked up this dastardly flopping habit. I’ve helped coach four-year-old girls soccer at the Y and it never crossed the minds of our girls to act like, well, four-year old girls. They were too busy talking with friends on other teams, watching planes fly over the field or chasing the ball around in a pack with about 10 other girls. No flopping, even though there were low velocity impacts with the ground due to lack of coordination. We did have crying, but it was because somebody got vanilla icing on a cupcake instead of chocolate. You know, legitimate stuff. Come to think of it, I’d have more respect for the world’s elite players if they cried and whined about stuff like not getting chocolate icing rather than mysteriously being tripped by an opponent who happened to be within about five yards of the flopper about the time he goofed and lost possession of the ball.

(Notice next time, floppers usually grab an ankle and virtually all writhe with the same pained expression while their closest teammate kneels to console him and the second closest teammate pleads an animated case with the hapless official.)

Having one official doesn’t help the sport whose boys cry wolf seemingly every trip down field. The officials I’ve observed throughout the World Cup are either smack in the middle of play and in the way, or they  offer their best guess on a flop from 30 meters away. Why not have a three-man official rotation like NBA basketball (speaking of whiners…)? Better yet, why not flash some of those red cards above the heads of the whiners instead of above the heads of the guys being called for a foul and whose mere proximity to the whiner surprisingly was enough to throw them to the ground, causing life threatening injuries (and from which the whiner miraculously recovers in time to kick the penalty or jump up and reposition in the event a call is not made in his favor.) 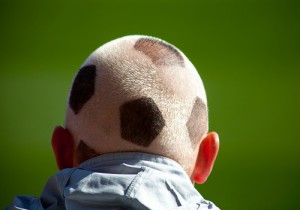 Soccer players are floppers. And whiners. And act like four-year old girls who got the wrong icing on a cupcake.