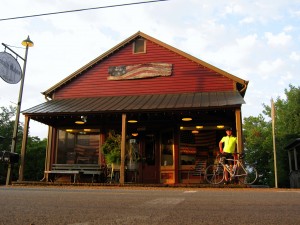 It was serendipitous that I should buy my first real bicycle one week before the Royal Crown decided I would be a driving hazard to the British public. I was denied a driver’s license, because, well, apparently I couldn’t pass the vision test. With my 12-month visitor’s license expired and a waiting period before I could retake the test, my new bike got promoted from recreational vehicle to basic transportation.

And it remained that for nearly the next year until my family returned to the United States. We formed a bond; an understanding. It faithfully carried me across the English countryside and I dutifully repaired about two dozen of its flat tires. I’ve since graduated to a road bike that’s carried me thousands of miles, mostly along the back roads of Williamson County, Tennessee. That’s a few hundred hours to spend with yourself. You either think about something – anything – or the monotony will drive you over the nearest bridge. Along the winding way, riding a bike has revealed at least five observations about life.

1. Flat surfaces offer no challenge. Everybody likes to coast in life now and again, but if you find yourself content with coasting, you’ve gone from taking a breather to simply logging life miles. You may be moving, but you’re really not putting anything into life and you really aren’t getting anything out of it. Go find some hills. Yeah, they’re tough, but after you’ve slogged your way up enough of them you get in shape and find that you can do more than survive them, you attack them. Their pinnacles become sweeter and the coast down the other side becomes a deserved reward.

2. Adverse elements strengthen your resolve. I’m not good enough at math to calculate the windchill factor generated when riding in 22 degree weather. Frankly, I’m not sure I want to know. I can tell you it was somewhere about the first mile of a 20-mile ride when I could no longer feel my feet that I began thinking I might actually be the idiot people passing me in warm cars thought I was. But I’ve also ridden in pouring rain, wind so strong it nearly blew me off the road and heat that made me sweat before I ever saddled up. I’ve learned there are always adverse elements between you and your goals. Your choices are to push through the elements and aggressively pursue your goals or sit it out waiting on a handful of sunny, 68 degree days. Push out there. The elements never get easier, but you do become more determined to overcome them. 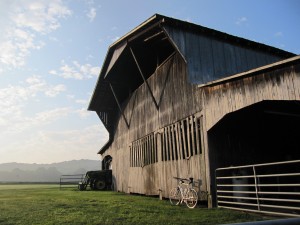 3. Stop and take a picture. I’m a kinder, gentler bike rider. Yeah, sure I wear the little stretchy shorts that feel like you’re sitting in a sagging diaper, but I say hello to walkers and runners and waive to other riders. Too many dudes take it too seriously which is why nearly every mile I’ve ridden, I’ve ridden alone. I enjoy the freedom to stop and take a picture. in fact, I ride looking for pictures to take. Sometimes, going to find a unique picture is what gets me out of the house on a 22-degree day. Pictures force me to notice the world around me. Too often we are in such a hurry to put our heads down and forge through life, pounding mile after mile. Stop and look for life’s picture moments. They are everywhere. Don’t miss them.

4. Life really does come at you fast. It is amazing how flying over your handlebars and hitting a desolate road can seem like it is happening in super slo-mo, that is until the adrenaline flash passes and the pain of a broken pelvis rockets through your body like lighting. Thank God my accident wasn’t worse. It could have been. I could have smashed my head, suffered brain trauma and died in less than a couple seconds. Life sometimes blindsides you and there really is no way to prepare for it ,which is why it is important to live every moment with the awareness it is a gift. When the adversity does come, hopefully you’ve developed the resolve to deal with it (which is why you need those hills!). 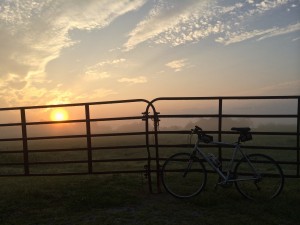 5. Every sunrise is worth seeing. I’ve pulled out of my driveway countless times at first light pushing hard to get to a particular place along my intended route to see the sun pop over the hills and splash its first light across the fields. I’ve photographed dozens and dozens of sunrises and I’ve never seen a bad one – ever. There is something inspirational about a sunrise. It is like a daily reminder of Jesus’ resurrection, turning darkness into light that offers hope for the day ahead. Sunrises take effort to get up and get into position to see, but your effort will be rewarded with the majesty of God.

No, I’ll never race along the roads of the Tour de France but riding a bike has made the road through life a lot more meaningful. I do, however, recommend having a driver’s license. I never said every road you travel in life has to be a challenge.