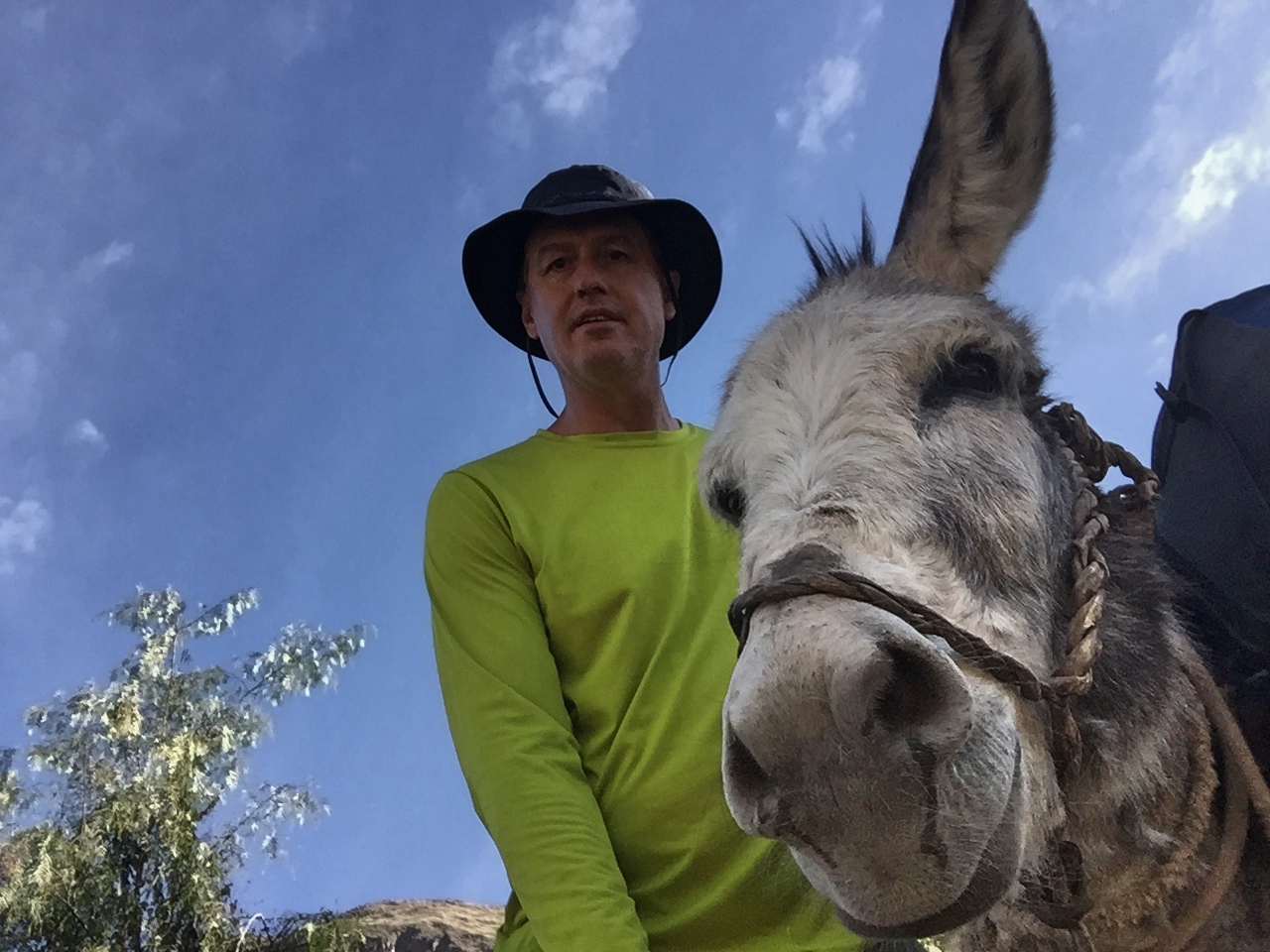 I sized up the donkey standing about 15 feet in front of me; then I casually walked over. I kept my distance because I’m not an equine kind of guy, but I had something to say. I looked the beast of burden square in the eye and decided to keep my comments brief and to the point.

“I’m glad I’m not you the next five days,” I said with equal parts sarcasm, sympathy, and relief.

Soon enough, after about three hours on the trail, I began to call him, “El Loco,” translated, “The Crazy.” He meandered along at his own pace — drifting off from the other two donkeys and the group I was a part of. He wasn’t obstinate, mostly. Let’s just say he was his own donkey.

But that was all to come. For the moment, he stood there with at least 100 pounds of backpacks strapped to his back just staring at me. There was no reaction to what I said. I wondered, was he oblivious to the difficult descent along the rocky trail into the canyon below then up the other side where he’d have to grunt that weight up more than 2,000 feet of elevation change and over a nearly 11,000 foot summit? Or, was he silently sizing me up, plotting payback for what could rightly be perceived as an insensitive comment.

His sad eyes bore a hole through to my soul. I began to feel badly and then it dawned on me. This was a Peruvian donkey and he only spoke Spanish. He hadn’t understood a word I’d said!

I’ve often wondered where exactly these “uttermost parts of the earth,” are located that Jesus talked about. You know, as in Acts 1:8, “You shall be my witnesses in Jerusalem, Judea, Samaria and the uttermost parts of the earth.” I hadn’t really given it any thought before leaving on a recent mission trip, but if I had, I wouldn’t have classified the mountains of Peru as “uttermost.” Heck, I had traveled 3,750 miles and didn’t even change time zones. But what do I know.

I’m 6 feet 5 inches tall, and after seven hours shoehorned into an overcrowded microbus as it wound its way up rugged mountains at a pace slightly faster than that of a two-toed sloth, I was summarily deposited at the edge of “uttermost.” The donkey was about to help me get the rest of the way there. 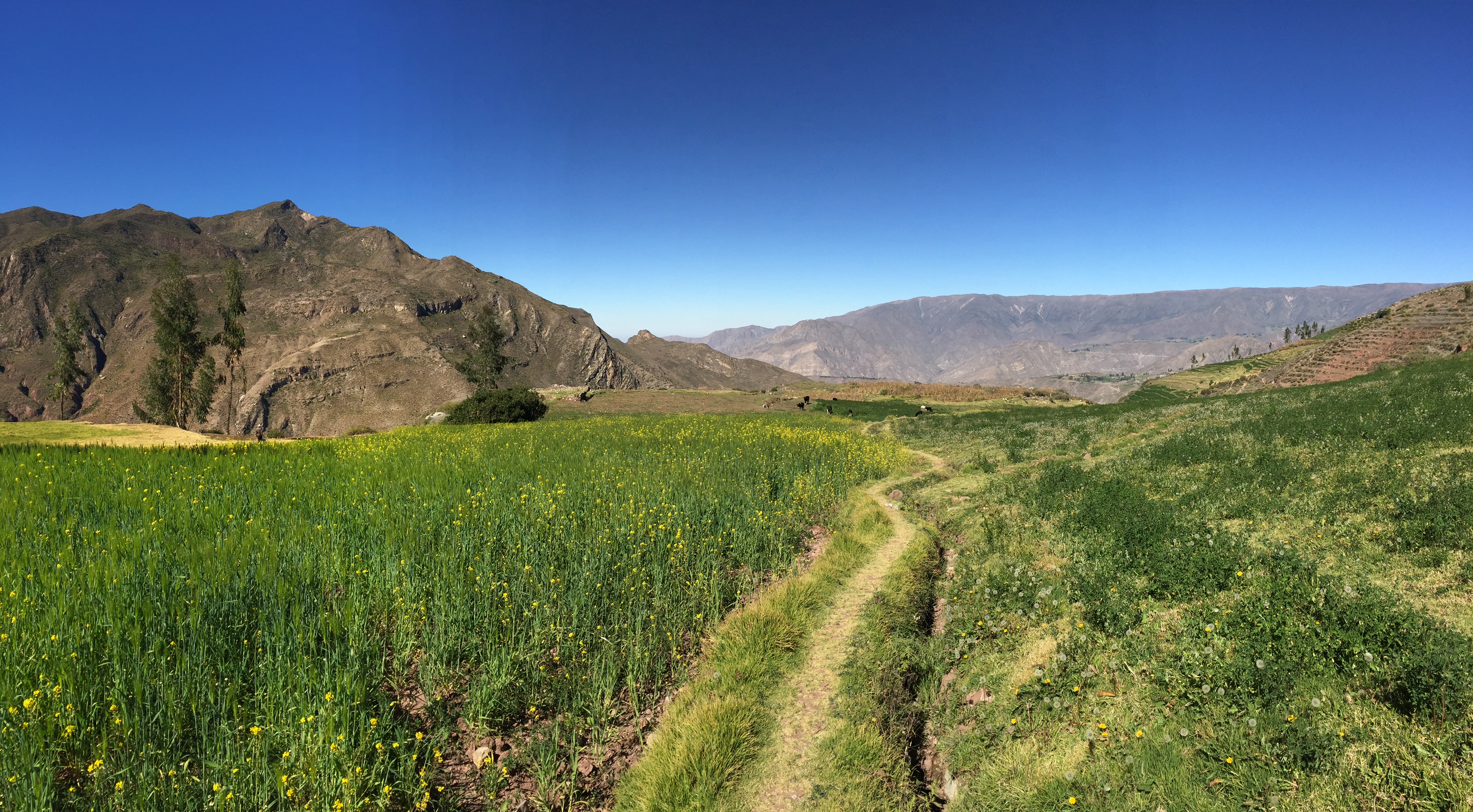 The five-man backpacking team I was a part of spent a week hiking in the shadows of Coropuna, the dormant snow-capped volcano just north of Arequipa, Peru. We looked like ants on ant trails compared to the rising peaks around us. We encountered hard-working people living in adobe-block houses with dirt floors. They survive by farming terraced fields they’ve wrestled from the rocky terrain whose soil is so dry at times it has the consistency of baby powder. Somehow, they coax from the ground potatoes, alfalfa, corn, beans, and other produce. Irrigation trenches cut into the mountainsides feed snowmelt and spring water to the delicate crops.

Our mission: Investigate how many, if any, believers lived in the 10 or so isolated villages to which we could trek, and to better understand what strategy might be employed to permeate these villages with the gospel. Answer: There are few believers and no easy solutions for how to increase their number.

I think people read Acts 1:8 and assume concentric geographic circles extending outward from their “Jerusalem,” kind of like ripples in a pond. However, after this trip, I’m convinced the ends of the earth are closer than one might think. To the casual observer this area of Peru looks like a religious place, and it is — highly religious. However, God was mostly absent, at least as He is reflected in the lives of the people.

Statistically, there are few Christians scattered through these mountains, but like Romans 10:14 asks, “How can they believe in whom they have never heard?” One might argue they have heard of Jesus through the teachings of the Catholic Church, but Jesus takes a distant backseat to Ursula, Isidro, Mary, and a host of other Catholic saints who are frequently venerated through alcohol-sodden “holy” festivals that incorporate elements of the indigenous religion practiced by the people’s Inca ancestors. The deeper our donkeys led us into the mountains, the more evident it became that what these dear people have not heard is the bondage-breaking, life-transforming message of the gospel of Jesus Christ. 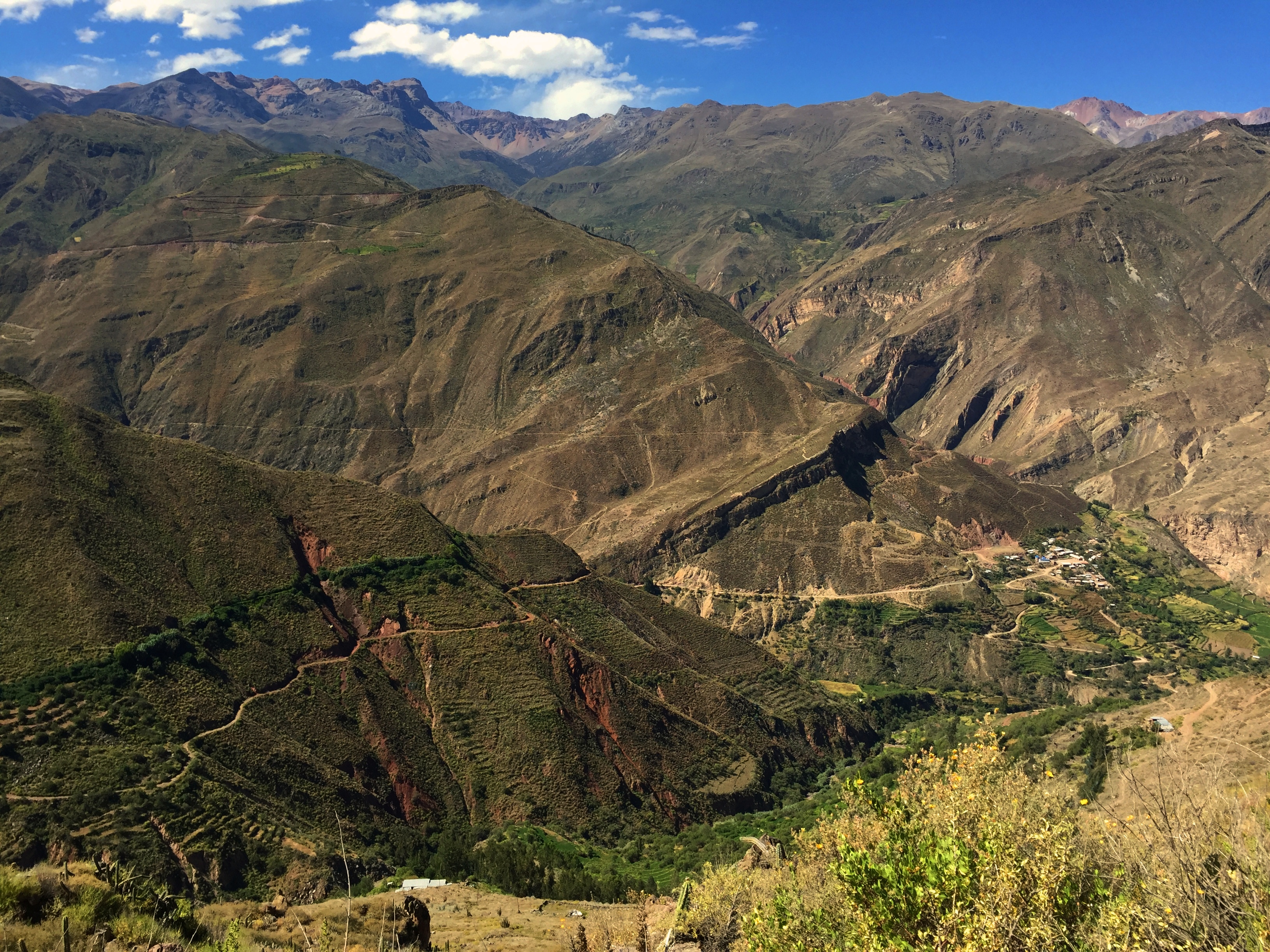 And that’s when I realized ol’ El Loco may have understood what I said to him but chose to ignore me. Maybe he knew I needed to be gently led to the “uttermost” and reminded that the uttermost can be anywhere a distance must be traversed to get the gospel to someone, whether it’s the distance to the rem- ote mountains of Peru, the far side of the earth, the emotional distance that exists between family members, or the chasm of fear that needs overcoming to walk across a yard to reach an intimidating neighbor.

Could it have been that God was leading El Loco to lead me farther into those mountains to challenge me, to ask me once again, “And how are they to hear without someone preaching?”

I turned my attention back to my daily life here in Tennessee as we removed the burden from El Loco’s back for the final time. I looked at him and thought, “Maybe Ol’ El Loco isn’t so loco after all.” God had used him to show me that I must bear my own burden, one for the spiritually lost right here in the world I frequent every day where “uttermost” is everywhere.

Walking away, I turned to El Loco and said, “Gracias.” This time he twitched his ears. I think he understood.