October 23, 1983 was a big deal in my hometown, a military town. I was nearly two months into my senior year of high school when news flashed through the community that 241 US servicemen, including 220 Marines had been killed in a suicide bombing in Beirut, Lebanon.

The bombing occurred at about the midpoint of the Lebanese Civil War that lasted 15 years (1975-1990). Images of smoldering rubble that moments before had been an apartment building seemed to be a staple on the nightly news. I became familiar with the term “Green Line,” but confess I never listened closely enough to know what it meant. Did any American? Would it have made a difference if we had? Lebanon seemed so far away and I watched from the safety of my home with relief that it was somebody else’s problem…Until that barracks was bombed. That single incident defined Beirut for me.

Driving down the Green Line yesterday I saw bombed out buildings standing as reminders of a war-torn nation. I did the math and realized if I’d been Lebanese I’d have probably been a fighter in that war. Having just turned 18 in Sept., 1983, I’m certain it would have been unavoidable unless of course I’d been in a family with means to leave. Most couldn’t.

The people of Beirut live with a looming stress of possible attacks from neighboring countries and possible outbreak of another civil war while dealing with the almost constant assassination of the country’s leadership since one of the more influential leaders was killed Feb. 14, 2006. The Green Line divided West (Muslim) and East (Christian) Beirut and drove the migration of people’s from one side to another. The war is over and the line is physically gone, but in many ways remains emotionally and mentally. For nearly three decades I’ve wondered what possible reason anyone could have that would warrant someone coming here. 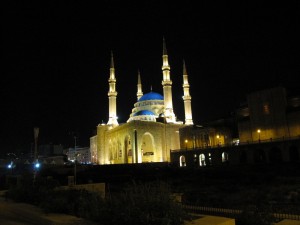 Despite the uncertainty of life – or because of it – and the fatalism that consumes many Lebanese Shiites (the majority Muslim population here), are finding hope in Jesus. About His coming it was said by the Heralding Angel, “Peace on earth, goodwill among men. I bring you good news of great joy that will be for all the people.”

Please pause and pray that many Shiites both in Lebanon and the millions around the world would know the peace of reconciliation with God. Pray that this Christmas season Good News of great joy will be proclaimed among THIS precious people and that God would bring many to faith.