I overcame Tebow Syndrome long before its namesake was born.

A syndrome is defined as the collection of signs and symptoms that are observed in, and characteristic of, a single condition. A lot of Christians suffer from Tebow Syndrome.

Tebow Syndrome is the condition where Christians latch on to “celebrity” Christians and hang on their every move, posting their latest expression of faith on social media. Often it’s done with an attitude of, “See, take that world. Stick a little Tebow in your pipe and smoke it.” Other times it is fawning admiration that borders on idol worship.

I remember when my condition emerged…and when it abruptly ended.

I used to have a subscription to Sports Spectrum magazine. Sports Spectrum is a magazine dedicated to sharing the story of Christian athletes. It has always been a well-produced magazine and the perfect magazine for a teenager obsessed with a ball – any ball – looking for role models. I was young in my Christian faith, heavily involved in athletics and trying to understand how all that went together. Sports Spectrum and its featured athletes offered guidance.

But that all changed in two issues.

There were two well-written features on two prominent pro football players at the time. Naturally I zeroed in on both and began to follow each more closely. Their teams headed deep into the playoffs, and then it happened. I can remember each instance vividly. In both cases the players believed a call should have been made in their team’s favor but no flag was thrown. Profane tirades against officials poured into the ambient sideline microphones.

In each instance there was no question it was the players featured in Sports Spectrum. I was shocked. The first time I thought, “Well, heat of the battle and the call did suck.” However, a week later the other player energentically ripped off an intense violation of the Third Commandment, you know, taking God’s name in vain.

I didn’t know what to do with that. Here were two guys about whom a big ol’ Christian fuss had been made yet with no apparent differentiation between them and anybody else. I wrote Sports Spectrum and canceled my subscription. It took a while since that was in the days of letters and stamps, so the subsequent issues that came went unread straight into the trash.

I was reminded of this as I culled through Facebook and came across an article somebody posted titled, “Faith on the Field.” It listed players and coaches playing in the college bowl games who were “people of faith.” I laughed out loud at the mention of a prominent coach whose  F-Bomb directed toward his quarterback was easily lip read with the camera closely trained on the exchange.

But here’s the deal. I’m not judging these athletes and coaches. Disappointing? Sure, but athletics is an intense endeavor that triggers intense emotions. I’m also not condoning their behavior either. I’m simply saying I don’t expect people to walk on water anymore.

My real frustration is directed at Christians who suffer from Tebow Syndrome. Obviously football player Tim Tebow is the person from which my self-titled syndrome originates. He’s a quality young man (despite the fact he played at the University of Florida). He is staying strong in his faith and I hope he can remain that way under the intense scrutiny from the secular world, but which is possibly more intense from Christians. Like leeches, some Christians latch on to his every move then post it in social media with comments that express the attitude, “Take that world. Stick a little Tebow in your pipe and smoke it.” However, Christians have created in their own minds such an expectation of him that unspoken is the sentiment that he better not screw this up and embarrass us all. The embarrassment, however, is that he has been elevated to such an unhealthy level in the eyes of Christians. 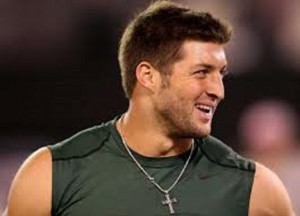 Christians also develop Tebow Syndrome with other athletes and personalities (Carey Underwood comes to mind) as well and with other cultural things like the stream of “Bible” movies that have come out such as “Noah,” “Exodus,” and “Son of God,” to name a few. They jump on the “Bible” bandwagon before rightly discerning whether the story lines accurately represent Scripture (spoiler alert: They do not).

If you feel you may be suffering from Tebow Syndrome related to anyone or anything, here’s a little advice: Stop it. Stop it right now and repent of idolatry because your elevation of Christian culture has reached an unhealthy level. Our calling is not to elevate Christian culture or celebrity Christians, it is to elevate Jesus Christ.

Next, take it down a notch – or 12 – on the trumpeting everything that comes across social media that blabs the latest exploits of Tebow, or any other Christian celebrity. Be honest, if you post something in support of them and then they falter, you’re not as sorry for the damage they’ve done to their Christian walk as you are embarrassed because they let you down and made you look bad.

Finally, concentrate on living your own faith in your own context and quit living vicariously through somebody else’s faith. It might not be as glamorous as praying at midfield in front of 85,000 people, but it will certainly be a lot more meaningful.

If a syndrome is defined as, “The collection of signs and symptoms that are observed in, and characteristic of, a single condition,” that sounds like a great definition for discipleship.

Let’s be diagnosed with Disciple Syndrome.